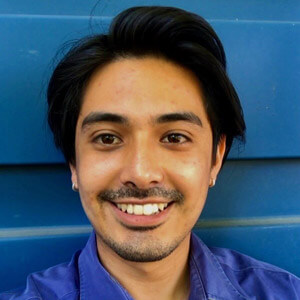 Robert Reyes Villagómez is a housing justice organizer. In 2018, they graduated from New York University with a Bachelor’s degree in Environmental Studies and Anthropology. They went on to organize an environmental and health justice campaign in Uniontown, Alabama. Robert conducted a participatory toxicology study and held classes on the arts and civic engagement at Robert C. Hatch Highschool in Uniontown, Alabama. During this campaign, they found their place in the racial justice movement in the U.S. thanks to their mentor, Esther Calhoun.

Robert then worked as a tenant organizer in the Bronx, New York, and saw first-hand the intersection between housing and health in a low-income, multi-racial community. Mold, infestation, and lack of services plagued the hundreds of families they worked with. Together, families organized to pressure their landlords and regulatory agencies to win improvements in their living conditions.

With the outbreak of the pandemic, Robert moved back home to Los Angeles. They now work as the statewide organizer in the Resident’s United Network (RUN), one of the only grassroots organizing projects with community leaders who have experienced homelessness, addiction, and housing insecurity. Robert’s goal is to transition RUN to be fully membership-led to push for housing justice policies by the community for the community. Within the organization, they also are strengthening regional organizing and participating in the Justice, Equity, Diversity, and Inclusion Task Force to promote equity in decision-making. In every situation, they work across race and class to form communities of care that challenge power and demand accountability.

Robert works in the Residents United Network (RUN) to elevate the leadership of tenants to create state housing policy by the people for the people. They have worked for the past year to establish the RUN Steering Committee that will operate as a board committee in its parent organization, Housing California, to institutionalize tenant voice in decision-making and shape organizational direction. Robert looks forward to designing the process for the regional membership to democratically select the RUN Steering Committee and deepening the collaboration between community leaders and legislative advocates. Robert wants to see a statewide, tenant-led movement for housing justice in their home state of California and works to that end.