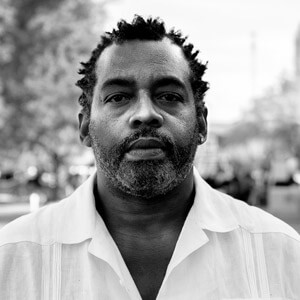 Quraysh Ali Lansana is author of 20 books of poetry, nonfiction, and children’s literature. Quraysh Ali is currently a Tulsa Artist Fellow and serves as director of the Center for Truth, Racial Healing, and Transformation at Oklahoma State University-Tulsa, where he is also a lecturer in Africana Studies and English. Quraysh Ali is creator/executive producer of KOSU/NPR’s Focus: Black Oklahoma monthly radio program. A former faculty member of both the Writing Program of the School of the Art Institute of Chicago and the Drama Division of The Juilliard School, Quraysh Ali served as Director of the Gwendolyn Brooks Center for Black Literature and Creative Writing at Chicago State University from 2002 to 2012, and was an associate professor of English/Creative Writing there until 2014.

His work Our Difficult Sunlight: A Guide to Poetry, Literacy & Social Justice in Classroom & Community was published in March 2011 by the Teachers & Writers Collaborative and was a 2012 NAACP Image Award nominee. His most recent books include Opal’s Greenwood Oasis, the skin of dreams: new and collected poems, 1995-2018, The Whiskey of Our Discontent: Gwendolyn Brooks as Conscience & Change Agent, and The BreakBeat Poets: New American Poetry in the Age of Hip Hop.

Quraysh Ali’s work appears in Best American Poetry 2019, and his forthcoming titles include Those Who Stayed: Life in 1921 Tulsa After the Massacre. He is a founding member of Tri-City Collective and serves on the Board of Directors of the Philbrook Museum of Art and as a curatorial scholar for The Thomas Gilcrease Institute of American History and Art.

Education is the greatest escape from poverty and its numerous ills, which often lead to poor mental health and substance abuse. Achieving success through education and intervention not only empowers one’s mental health in achievement, success, and belief, but also awakens intrinsic self-actualization. Tulsa’s Mayor’s Office of Resilience and Equity’s “Equality Indicators” study shows us that the city’s Black youth are suspended and arrested at rates three and five times higher than their peers. Substance abuse is also a plague that affects teens and adults in North Tulsa and surrounding rural communities. Tri-City Collective’s collaborative projects with the NS121 Club and Grand Lake Mental Health Center will work to counteract this local school-to-prison pipeline, as well as the cause and effects of addiction.