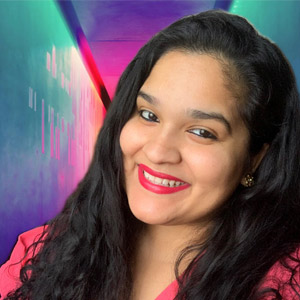 Jessica Santana is the co-founder and CEO of America On Tech (AOT), a nonprofit organization preparing the next generation of technology leaders in order to decrease the economic and racial wealth gap in underestimated communities. AOT provides students with access to the development, mentoring, networking, and professional experiences that prepare them for degrees and/or careers in technology. Their work has been featured in major media outlets, such as Forbes, CNN, Wells Fargo, Sirius XM Radio, Huffington Post, TechCrunch, BET, Black Enterprise, AlleyWatch, and The Network Journal.
Prior to AOT, Jessica worked as a technology consultant for global brands, such as JPMorgan Chase, Accenture, and Deloitte.

Jessica has been named to the Forbes 30 Under 30 list and NYN 40 Under 40 Rising Stars list. She is an Ashoka Emerging Innovator, Pahara Institute Next-Gen Leader, World Economic Forum Global Shaper, former Entrepreneur in Residence at General Assembly, Wells Fargo Millennial Activist, Camelback Ventures Social Innovation Fellow, Points of Light Civic Accelerator Entrepreneur, 4.0 Schools Launch Entrepreneur, and JPMorganChase Global Enterprise Technology Leader. Jessica was also one of the inaugural technology anchors on Univision. In 2020, New York City and New York state named her a Brooklyn Hero for her work in the community during COVID-19, and Causeartist named her one of 37 social entrepreneurs to watch.

Jessica graduated with undergraduate and graduate degrees in Accounting and Information Technology from Syracuse University. She has also obtained a Certificate of Business Excellence and Executive Education in Social Enterprise from Columbia Business School.

Jessica is excited about developing a transformation framework that puts the power in the hands of young people of color to become creators of technology.