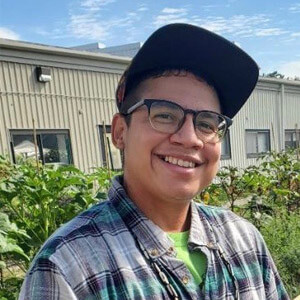 Cris Izaguirre is a farmer, educator, writer, trans, queer Nicaraguan immigrant of Afro-Indigenous descent. He is an old-school jaded New Yorker with a big laugh, committed to creating spaces that celebrate the brilliance of Queer & Trans, Black, Indigenous, and People of Color.

For five years he managed an urban farm in Brooklyn, where he taught Black and Brown students how to grow food from seed to harvest through a social justice lens. Prior to their work in agriculture, they worked for LGBTQ rights organizations, including El/La Para Translatinas, Community United Against Violence, and Lambda Legal. Outside of paid work, he has directed and produced community theater shows at WOW Theater Cafe, BAAD, Dixon Place, and Galapagos Art Space.

Cris currently resides in Decatur, Ga., with his partner and their unruly cat.

Cris is currently working on a series of writing workshops titled “Stories from My Mother’s Kitchen: exploring our ancestral connections to food.” The series delves into the work of BIPOC poets, writers, chefs, and food historians. Through writing prompts, foodways explorations, and personal narratives, these workshops seek to create space for BIPOC to connect and explore how food maintains cultural practices, rituals, and acts of self-determination.

Cris is also excited to continue to develop their social justice curriculum designed for schools, urban farms, gardens, and anyone invested in food justice. The curriculum will cover the history of racism in U.S. agriculture as well as resistance movements rooted in food and land.