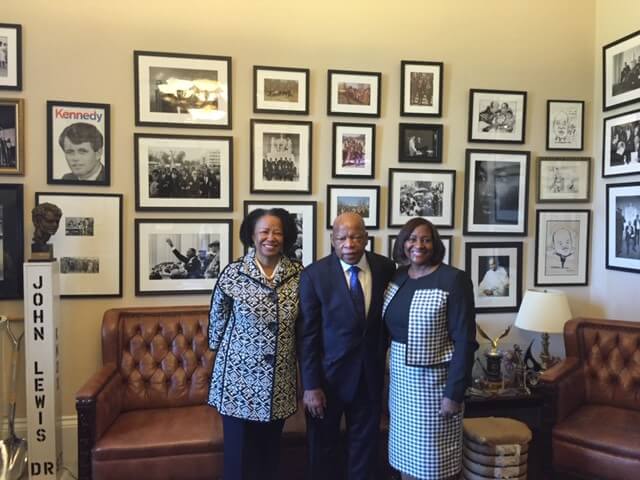 Congressman John Lewis understood that human suffering often ignites the human heart, a phenomenon experienced globally recently as George Floyd’s suffering spurs an awakening to the racism around us.

As a young freedom fighter, Congressman Lewis suffered a brutal beating and a fractured skull at the hands of law-enforcement troopers in Selma, Alabama in 1965. Yet, that suffering ignited a lifetime of courageous fighting and standing up for right, or as he would certainly put it, “a lifetime of making good trouble.”

Congressman Lewis lived long enough to witness the massive, heartfelt protests after the horrific and callous killing of Mr. Floyd by the Minneapolis police. Congressman Lewis said the protests would “redeem the soul of America and move us closer to a community at peace with itself.”

I was privileged to come to know Congressman Lewis and benefit from his wisdom while serving as Vice President of the W.K. Kellogg Foundation. He was an amazing, heart-driven leader who held a hopeful vision for a healed America. When I created and led the implementation of America Healing, a multi-year, $75 million racial equity and racial healing initiative in 2010, Lewis stood with us at the launch. “At a time when our nation shows disturbing signs of becoming more polarized, this courageous effort by the W.K. Kellogg Foundation to promote healing within local communities is sorely needed,” he said. “It reminds us of our true democratic ideals as a nation and of the inalienable right guaranteed by our founding documents to the free and unfettered opportunity that every human being deserves.”

Congressman Lewis believed in the potential, indeed in the promise of America. Yet he also recognized the multifaceted, comprehensive effort it would take to actualize that dream. He foresaw the danger of polarization and called on all of us to mobilize and stand up for what is right.

Twelve years later, even in the midst of the fight of his life, battling pancreatic cancer, Congressman Lewis again supported work that can heal America and move us forward — Truth, Racial Healing and Transformation (TRHT). Congressman Lewis understood that America has never implemented a comprehensive national Truth process. TRHT, which we also crafted at the Kellogg Foundation, offers a Truth Commission approach that addresses this country’s unique, divided and protracted history of racial hierarchy. My goal in creating this model was bringing together the combined energy of standing up for justice, non-violence and racial healing — the combined energies also embodied in the legacy of Congressman John Lewis.

Just weeks ago, when Congresswoman Barbara Lee introduced HR 100, a resolution calling for a US Commission on Truth, Racial Healing and Transformation, Congressman Lewis supported us in his final days.

“The Truth and Racial Healing Commission resolution puts us on the path of reconciling our nation’s brutal history with the grave situation we currently face,” he said in a statement supporting the TRC Commission. Reflecting on the unfinished work of the Civil Rights era, Congressman Lewis said, “We were able to build a movement to transform the face of our nation. We knew, however, that the roots of racism, bias and centuries of socioeconomic inequality are deep and require thoughtful, inclusive and comprehensive efforts. This resolution moves our country in the right direction of establishing a model and process to explore, expose, confront, and reconcile the truth of our past so that we may create a more just and equitable future for all, not just for a select few.”

Once again, Congressman Lewis furthered his visionary call for telling the full truth of our story as he has repeatedly done over the decades. His legislation created what now stands as part of his legacy: The Smithsonian National Museum of African American History and Culture. This National Treasure centers the African American story in the heart of America’s story as a way to deepen our capacity to know and to love ourselves, one another and our country. As a non-violent warrior and guardian of truth, his life‘s work has been to open our hearts and minds to the power of the beloved community.

In 2013, honoring the 50th Anniversary of the March on Washington, Congressman Lewis noted that Martin Luther King, Jr. once said, ‘We may have come here on different ships, but we all are in the same boat now.’ Then, he delivered a powerful ending to his speech, “So it doesn’t matter whether they’re black or white, Latino, Asian-American or Native American, whether we are gay or straight — we are one people, we are one family, we are all living in the same house — not just the American house, but the world house.”

Thank you, Congressman Lewis. We will make your vision a reality.