Black, Asian and Hispanic residents are outpacing their White counterparts.

“The largely insular appraisal industry of 78,000 is skewed over 85 percent white with less than 2 percent of appraisers identifying as Black.”

(CNN) Black and Latino Americans are receiving the Covid-19 vaccine at significantly lower rates than White people — a disparity that health advocates blame on the federal government and hospitals not prioritizing equitable access.

CHICAGO (WLS) — It’s been 45 years since the first observation of Black History Month.

This year, the celebration of the contributions of Black people comes in the wake of widespread protests over the death of George Floyd and a racial reckoning across the US (Read more).

Social change agent Dr. Gail C Christopher is on a mission to heal our nation, and dismantle the collective belief at the core of our dysfunction: that some lives are worth more than others. Dr. Christopher has been advising Congress on how we can best move forward, and she believes a Truth, Racial Healing and Transformation Commission is the answer. Listen to her latest interview with Mary Curtis for her podcast, “Equal Time” here: https://www.rollcall.com/podcasts/equal-time/if-racism-is-a-lie-how-has-it-been-sustained-institutionalized-and-structured-in-america/

“On this day of service and reflection, the greatest service we can render as individuals and collectively is to commit to ending racism. We have now all witnessed the dangerous and destructive consequences of believing in a false hierarchy of human value, indeed of human lives. The lie of racial hierarchy and its many associated false narratives were laid bare recently. This nation’s symbolic place and institutional processes of democratic governance were violated with reckless, but determined abandon. We are still reeling from the shock and humiliation in our hearts and bodies and in the eyes of the global community.

“Dr. Martin Luther King, Jr. believed we would get to the Promised Land. I believe that, too. But we must commit to the necessary work before realizing his vision, his dream. Not enough Americans share Dr. King’s Dream and far too few are willing to labor to bring it into reality. Overcoming and healing from racism requires focus, intention and disciplined effort. Most public health leaders know that defeating the Covid-19 pandemic requires communal effort.

“Our individual choices and decisions shape our collective realities and structures of normality. Many public health leaders have recently asserted that racism is a twin pandemic, a lethal public health crisis. This level of increased awareness is good news. It is time that we view the work of ending racism as a communal effort, too. The beliefs we hold about ourselves and others drive our thoughts, feelings decisions and actions. Critical actions like voting, engaging law enforcement, hiring or firing, providing opportunity or rendering medical treatment, enforcing health and safety codes and college admissions are a few illustrations of decision points that can be shaped by our levels of racism.

“Our beliefs are shaped by our lived experiences beginning in childhood. Democracy cannot translate into equity until we jettison permission to devalue people based on an antiquated taxonomy of humanity. America’s most deeply enshrined racist ideology will keep showing up within systems and policies, institutional cultures and structures of opportunity and in the communications tools of this era, mainstream and social media, until we deliberately and permanently eliminate the ideology. Algorithms will also embody and perpetuate the lies and patterns of racial hierarchy via technology and artificial intelligence without immediate intervention to stop the spread.

“Dr. King knew the protests and marches were means to an end: the creation of the Beloved Community. We also need the skills and capacities required for civility, empathy, compassion and perspective-taking. These skills are developed through effective racial healing, truth telling, trust building and transformation efforts. This is the vaccine needed for the pandemic of racism and it too will require a massive mobilization effort in response to the fierce urgency of then and now.” 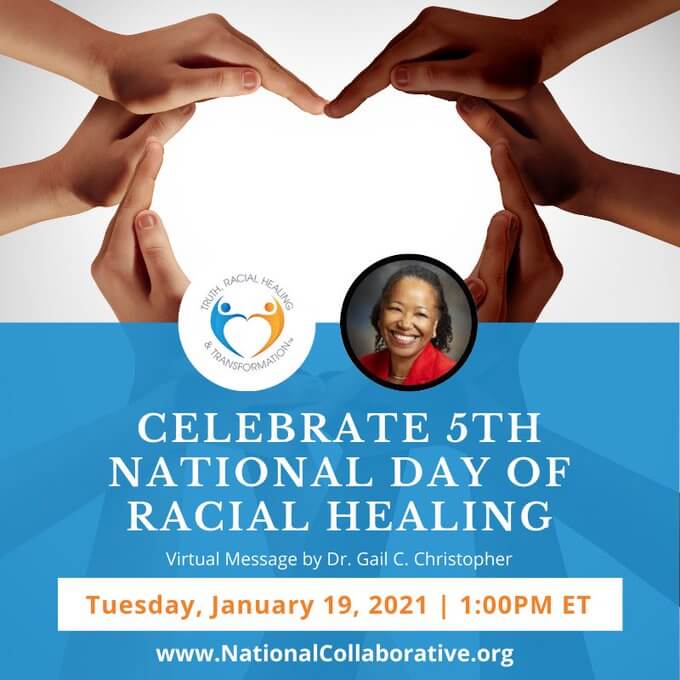