HealthEquityGuide.org is a resource with inspiring examples of how health departments have concretely advanced health equity — both internally within their departments and externally with communities and other government agencies.

About the Health Equity Guide

Commission on Security and Cooperation in Europe (Helsinki Commission)

NCHE as well as other organizations join voices to urge Congress to take action to address the ongoing healthcare crisis in Puerto Rico and the US Virgin Islands as a result of the recent hurricanes.  The letter calls for Congress to address the needed access to health coverage, services, and providers in order to address an intensifying public health emergency and further prevent deaths and injury. 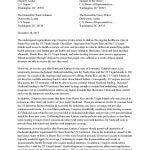 Culture of Health Leaders is a leadership development opportunity for people working in every ﬁeld and profession who want to use their inﬂuence to advance health and equity. Our leaders’ innovation helps build a Culture of Health, one that enables everyone in America to live longer, healthier lives. Through this program, our leaders will be prepared to collaborate and provide transformative leadership to address health equity in their communities.

Apply HERE to review applications for Culture of Health Leaders.

On behalf of The Leadership Conference on Civil and Human Rights, the National Health Law Program, the National Partnership for Women & Families, and the 234 organizations signed on to the attached letter, we urge you to oppose the Graham-Cassidy proposal (Graham-Cassidy). This proposal will eliminate affordable quality health care for millions of Americans by gutting the Affordable Care Act (ACA); slash federal funding and destroy Medicaid by turning its funding into per capita caps; eliminate the Medicaid expansion; and defund Planned Parenthood health centers. Graham-Cassidy would leave tens of millions of people in the United States significantly worse off than under current law. Without a full score from the Congressional Budget Office (CBO), we do not yet have a complete understanding of the full devastation that Graham-Cassidy would bring, but what we do know is more than enough for all our organizations to unequivocally oppose this bill. We strongly urge you to oppose the Graham-Cassidy proposal and urge Congress to instead move forward with bipartisan efforts on market stabilization and other critical issues to improve access to affordable health care for all people in the United States.

Please also be aware that The Leadership Conference on Civil and Human Rights will be scoring Senators’ vote on the Graham-Cassidy proposal in its Voting Record for the 115th Congress.

The National Collaborative for Health Equity strongly condemns the violence that resulted in at three deaths and dozens of injuries in Charlottesville, Virginia on Saturday, August 12, 2017. Our hearts are heavy, both because of the senseless injuries and loss of life, as well as the boldness of those motivated by hate to openly bash racial, religious, and sexual minorities. The fact that they felt so free to engage in hate speech and actions speaks to the depths to which our nation’s discourse has descended.

But we are confident that hatred will not win the day. The vast majority of Americans are repulsed by what we witnessed on Saturday. Now it’s up to all of us to condemn it.

To that end, President Trump’s statement that violence “on many sides [must end]” is inadequate. State and local officials are clear – racist, xenophobic thugs congregated in Charlottesville to incite violence. They must be prosecuted to the full extent of the law. As importantly, the false information that they have been fed – what white Americans are discriminated against in employment and education, that Christianity is under attack in the U.S. by proponents of Sharia law, etc. – must be denounced by the news organizations that purvey it.

On the positive side, it was inspiring to see so many activists – led by clergy and other leaders in civil society – come together to denounce intolerance and peacefully stage counter-protests. Should we heed its lessons, Charlottesville could be the Selma of this generation – a tragedy, but also a wakeup call that mobilizes broad sectors of our nation to declare that we will not accept hate.

We extend our prayers and condolences to the victims, as well as their families and friends, of the senseless hate-inspired violence in Charlottesville. And we look forward to continuing to work with the many leaders across the United States who are combating racism and intolerance with love and non-violence to help build a Culture of Health.

Todo Verde has come a long way! Jocelyn Ramirez’s mission to fight for the Latino community’s access to affordable, clean foods began with smoothies and has now grown into a full on catering business.

Her journey started back in 2014 when her father was diagnosed with throat cancer for the second time and Ramirez made the decision to put him on a strict plant-based diet in the days leading up to his surgery. “The doctors couldn’t do radiation therapy so close to his first round of treatment,” she explained. “So they were going to have to do surgery – it was going to be much more invasive. In order to get him ready for that surgery I had to get him as strong as possible to prepare for the recovery.” And she did. Her father healed quickly but it was a wake up call for the entire family. It also awakened something within her. “When my dad got sick we started to explore healthy food [and] my parents really encouraged me to follow my passion. When my dad was out of the hospital I decided to take the leap. That was my practice round in regimenting. It was a little incubator moment to try to heal my family through this lifestyle.”  (Read more)

Research shows that health equity is critical to building a happy, prosperous nation, but that doesn’t mean a one-size-fits-all approach is the answer. Join the Robert Wood Johnson Foundation for a webinar with national and local leaders working to create opportunities for all residents. You’ll hear about the ways a new definition can help us advance solutions and measure progress, and hear directly from communities working to ensure that everyone can be as healthy as possible.

By now we can all agree that the real target of Reagan’s enduring war on drugs was never drugs, it was African Americans. But if rising incarceration rates among black youth or the utter failure to curtail drug use is not enough proof, perhaps a new study from Northwestern University on racial differences among drug users will do the trick.

According to the study’s findings recently published in the American Journal of Public Health, abuse and dependence on “hard drugs” (opiates, amphetamine, etc.) are “less common among delinquent African American youth than those who are non-Hispanic white.”

The study was conducted over the course of 12 years and interviewed 1,829 youth (1,172 males and 657 females between the ages of 10 to 18) who were detained at Cook County Juvenile Temporary Detention Center in Chicago between 1995 and 1998. (Read more)